Words of wisdom you can implement in a minute or less! 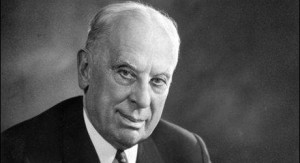 “If we are all in agreement on the decision – then I propose we postpone further discussion of this matter until our next meeting to give ourselves time to develop disagreement and perhaps gain some understanding of what the decision is all about.”

Attention Managers:
This is one of my favorite quotes. When GM’s Directors came to agreement too quickly (in Sloan’s opinion) he realized that there had to be issues that remained undiscovered and under-discussed, so he postponed the decision rather than rush to action. In today’s extra-busy world, do we sometimes fall into the trap of “quick and easy” in order to cross something off the to-do list? Or are we so relieved to avoid conflict that we charge to action before the ‘poised and polite spell” gets broken? We may not want an agreeable meeting to become disagreeable. Managers, pay attention when a meeting you thought was going to be bumpy turns out to be uncharacteristically smooth. It’s possible there’s a little something being swept under the carpet. Take an extra minute to ask a question that encourages people to voice their doubts now, because that pile of dirt under the rug will only grow with time.