How I Broke Out of the Box 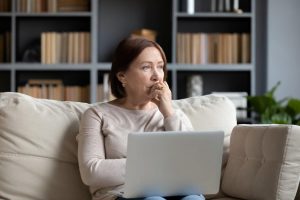 Yes, it’s been a while since you’ve heard from me. Truth is, I had a bad case of writer’s block. First time since I started this monthly newsletter seven years ago.

I sat down at my computer many times to write. Nothing. Nada. Zilch. But why? Communicating with you each month has been my joy! What was happening?

After much reflection, it hit me — and those of you who were my coaching clients or in my workshops will recognize this answer. One reason I was blocked was that I was trying to force something. I’d already done a series on virtual presence. What else was there to say? I started to feel the pressure of weeks, then months passing. “C’mon, Parker,” I said to myself. “It’s only 500 words! All you need is 3 tips, a good photo, and you’re done!”

That was the problem. Trying to fit into a time frame and a format that hindered rather than helped.

I’ve seen this many times when presenters try to follow a format that is “the norm” rather than what works for them, or when a leader feels she has to pretend everything is fine when it isn’t. In those situations, I coach the person to step away from the assumed expectation and just get real. I ask the presenters: “What if you could just toss these slides away and talk to your audience as people. What would you say?” And what flows is what’s real and it’s usually awesome. I ask the leader: “What would happen if you let yourself be a little vulnerable and shared how you’re feeling?” And what results is real, open dialogue between the leader and her team.

So, what did I do to get real? I decided to share this journey with you. I’ve been struggling and telling you that makes me feel a little vulnerable. I want you to see me as the poised, professional expert, always on top of her game. Then it occurred to me that I’m probably not the only one struggling, and maybe this will help you. So here goes!

First, I had to let go of the self-imposed demand that I write this newsletter every month, and free myself from the anxiety that was blocking me. Then, I needed to redirect my energy, find something else that engaged me as a writer and just write, and one day I started to write plays. Yup. Woke up, sat down, and wrote a 15-minute one-act play. Some of you know I’ve been active in the theater for years, but as a singer and actor, never as a writer. Until now. That’s where my energy took me, and since that morning I’ve written seven short plays! I don’t know where this idea came from, but it has been an amazingly wonderful experience. Several of my plays have now been performed on Zoom!

By letting go, I rediscovered the thrill of writing, the confirmation that I have something to say, something to share. And it has brought me back to you.

Here’s the big “so what?” for this issue:

If it feels forced, then you are likely working against yourself. Step away from any imposed expectations or restrictions, and let yourself be yourself. See what flows. Does your message become clearer? Do your emotions surface, allowing you to connect with others in a deeper way? You won’t know until you try. So, try! You can edit and reformat later.